If you haven’t figured out by my blog title I am an Engineer (Electrical) by degree and sometimes I can act like a nerd (did I really just admit that?).

Pepper (the now one year old Golden Retriever) decided in late April/May to lose most of her winter coat (and I mean tons of hair) in a few weeks. Considering she is only allowed in our great room / kitchen you would think our old vacuum cleaner would be able to handle it.

Well, it didn’t – we could still see fur on the carpet after vacuuming and it was starting to overheat every time I went to use it.

At that time Target, Kohl’s, etc were running big sales (think Mother’s Day presents) on the Dyson vacuum cleaners.  I have always thought that the Dyson Vacuum was a pretty neat design (engineer coming out in me), but I had never considered buying one due to the cost.  But, when I found out that they were highly rated for pet hair, on super sale, etc I seriously started looking at them.

I had to order the unit online and when the Dyson DC41 Animal showed up it was pretty easy to put together and start using.

I go so MUCH dirt, sand, dog hair out the first time I used it I had to get out the scale and weigh it (yes, I weighed it) – 12+ ounces of ‘stuff’ came out of my carpet!  (I told you I have some nerd tendencies in me.) 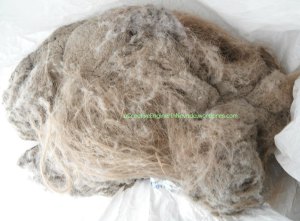 Dirt, fur and sand that the Dyson DC41 picked up the first time

I am happy to report that the amount of dirt, sand, pet hair definitely went down after the first few uses, but I usually have to empty the canister twice between vacuuming the whole house.

The model we bought also came with different attachments which I have used a few times: for cleaning couches, etc.

One feature that I didn’t realize it had has come in handy – I am able to turn off the bristles and ‘suck’ the dirt off the tile and throw rugs.

The unit also has washable filters and I just washed them out for the first time.  Besides doing that I also used the air compressor and blew out the vacuum (canister, hose, {any part that looked like it could hold dust},  etc).  I was shocked at how much dust came out (I was even filthy afterwards).

Note: I also wipe down the outside of the unit with a damp cloth after vacuuming the house since there is usually some fur ‘stuck’ (due to static cling I think) to the unit.

Since my last vacuum lasted about 10 years (I wasn’t even able to get a new HEPA filter for it anymore) I decided even though this one cost more it was worth it (especially when I saw how much dirt, sand and pet hair the old vacuum wasn’t getting out of our carpet).  I am hoping that by removing some of the dirt, etc from the carpet my allergies will not affect me as much either.

What is the latest appliance you bought that you ‘love’?

Note: I got nothing, but a cleaner house for this review  🙂