Since we are currently living with Unhealthy Air caused by the smoke from the Yosemite Rim Fire I thought it would be a good idea to share some information I recently learned.

I have been trying to keep Pepper (the Golden Retriever) inside the house as much as possible, but she is getting majorly bored (picture a sleeping dog most of the time).

So, I have started letting her outside for a while at a time.  We usually have walkers and dog walkers that come by the house in the morning and some of them give her ‘cookies’ (dog biscuits).  I usually get notified when they are going by since Pepper likes to bark at them (I think that is the ‘Hey, where is my cookie?’ call).  With all the smoke there are definitely less walkers. 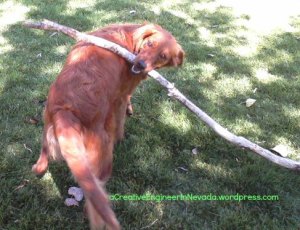 I have noticed that Pepper will play with LONG sticks

or will lay on the grass and just chew on something (some favorites – rocks, old plastic plant pots, etc).

She doesn’t seem to want to run around a lot.

That is a good thing since dogs can get breathing problems if they run around a lot in the smoke (I guess if the dog decides to run around it is OK, but they shouldn’t be ‘forced’ to by being taken for a run or long walk).

Hoping we get a change in the wind pattern soon so Pepper and the family can go for a walk outside.

Well, the family finally got a vacation this summer and we were ‘unplugged’ for over a week and it was SO nice.  We didn’t have a television in our first place and only turned it on once in the second place and we didn’t even read the paper.  I will blog about vacation later.

We arrived home at 1:30am last Thursday since we decided to fly out of the Sacramento, Ca airport and drive home over the Sierra Nevada mountains afterwards.  We saw a full moon on the way over and smelt some smoke on the way up, but there were no signs of a fire, etc.

We got up Thursday morning to pick up Pepper (Golden Retriever) from the Kennel (that is definitely a story for later) and nothing really seemed different.  After that I started getting on the computer and found out about the Yosemite Rim fire (which is about 100 miles as a bird flies from us).  I didn’t think too much about it other that praying the firefighters stayed safe, praying for some much needed rain, etc.

Well, by Thursday afternoon smoke was coming into our valley (usually we can see the Sierra Nevada mountains from town, etc) and it felt like ash or something was getting in the eyes when I walked out of the grocery store.  By later Thursday afternoon we had Ash raining down at the house!  Since we had to put some items in the car that afternoon I was wearing a baseball and a mask and you still could smell it.

Long story short is we STILL have smoke in our valley (it hasn’t cleared so we are now on day 6) and we have some ash around the yard.  You feel like there should be a snow storm outside since all you should do is stay in the house and Pepper is NOT happy about this – she got a walk a day at the kennel, but she can’t run around outside and play (if I let her outside she is mostly laying in the grass for a while).

They are saying the smoke might not start to clear until this Sunday (assuming the winds change directions).

We still have ash pieces in my car and it is pretty hard to breathe outside (it even smells some in the house even though we haven’t opened any windows).  I am wondering how long it will take for the smoke smell to go away…

The good news is I saw a small patch of blue sky with fluffy clouds this morning right after I got up.  It was definitely covered up within an hour.  (So, I know this smoke is not permanent – I hope!).

I had taken some ‘now’ photos, but I would need to go digging for some ‘clear’ photos for you to understand the difference.  A friend posted some photos on Facebook yesterday and said I could post them without giving her credit (I don’t think she even knows I have a blog – maybe I will have to tell her…).  Anyways, thanks Karin for the use of your photos. 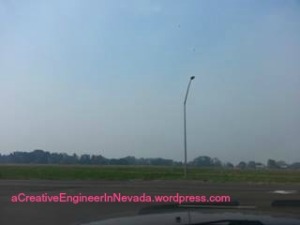 So, which would you rather be living in?

Valley with smoke from the Yosemite Rim Fire

Valley on a ‘normal’ Spring Day

(And, yes I know we don’t have it as bad as the people in the path of the wildfire or the firefighters, but I have never seen anything like this in the 20 years we have lived here.)

Where she states everything she is currently grateful for and asks what we are grateful for.  Wow, not something I have thought about lately.  So, I decided to make a list of my top 5:

a) Family – I am grateful for the immediate family I have.  I love how creative and smart they are and that we have fun doing simple things – hiking, kayaking, fishing, playing with Pepper the Golden Retriever, snowshoeing, etc.

b) Pepper – I am grateful for the Golden Retriever we have even though in the beginning we were afraid she would not make it home after 8 days at the vet at 8 weeks old (they think she had Parvo).  The first time I took her to the local vet (after we brought her home the second time) the vet implied we had gotten the runt of the litter (no, she was the same size as her brother and sister when we picked her up, but was down to 5 lbs 8 oz after being in the vet that long) and potentially had a heart murmur/defect (when she went to the vet last month I was told she was really healthy and had a strong heart – Thank God).  Some people say Pepper acts very ‘human like’.  I have to agree since at times it is like she understands everything we say (whether she decides to obey is a different story).

c) Where we live – I never thought that we would still be living in the desert 20+ years after moving here, but this place has grown on me.  Do I always love the wind?  No, but it does cool us off.  One thing I could do without is all of the dust that gets into the house (but you have to expect that in the desert).  One good thing about living here is how close we are to the Sierra Nevada Mountains which has all the hiking, fishing, kayaking and snow sports we like to do.

d) Extended ‘family’ – My extended ‘family’ consists of blood / married into family and some friends that feel like family.  I love that we can get together after being apart for a while and pick up where we left off.

e) Church – I am grateful for the church family we found.  It is definitely not the closest church we could go to, but it fits our family and has for many years.

What are the top 5 things you are grateful for?

Did you know you can sign up to get email recall notifications for vehicles?  I signed up for them at this site:  http://www.safercar.gov/

I recently received one and was very happy to find out it is not for the model we own, but by having the email sent to me I can find out much quicker than waiting for the dealer, etc to write me.

Almost two months ago I answered a survey that TailorFairy.com (based in Germany) put on asking which piece of material we would like to win.  Knowing she would ship internationally I entered, but did not have high hopes that I would win.  Well, I won and the piece of pink stretch material arrived about a month ago.

I have been planning / dreaming of what shirt I am going to make with the piece of material.  Now to get my sewing machine fixed so it likes to back stitch again and then this project will come closer to the top of my To Do pile.  I definitely will post a photo when I decide what shirt to make and when it is done.

What have you entered and won lately?